Are you aware that organic waste actually produces harmful methane gas that can be seen as a major contributor to global warming? Every year, humans generate millions of tons of food waste that ends up in landfills across the globe. As this organic waste decomposes, it sends tons of methane gas into the atmosphere. That is definitely food for thought – especially if you work in the food industry like we do!

Needless to say, I found it really interesting when I learned about a new technology my North American colleagues had implemented in our Detroit (DTW) and Los Angeles (LAX) facilities in January 2014 and May 2015, respectively. My colleagues have started using a new waste decomposition system that literally converts organic waste into water. When I first heard about it, I could hardly believe it!

This new technology was developed by a company named EnviroPure. It is a self-contained, aerobic food waste decomposition system which maintains organic waste at an optimal temperature and oxygen level to accelerate natural aerobic decomposition. The cool thing is that it handles virtually any kind of food waste, including vegetables, fruit, meat, fish, poultry, and dairy products. It can even handle bones, shells and pits! Incredibly, all of the food waste decomposes within just 24 to 48 hours. 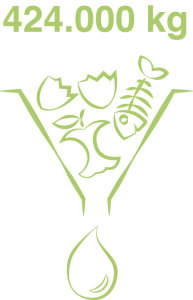 The secret to the system lies in EnviroPure’s proprietary all-natural, biodegradable EP-BioMix® blend which ‘feeds’ the natural bacteria already present in food with the critical micronutrients required for rapid breakdown. With this technology, the organic waste can be quickly reduced into a harmless liquid which meets (or even exceeds!) regulatory standards for safe disposal into municipal waste water. Picture this – between January 2014 and July 2015, these two LSG Sky Chefs units have helped our environment by diverting a combined 424 tons of organic waste from landfills. And that figure is growing daily!