There are many fascinating facts about the event, but I would like to share a few of my favorites with you.

This year, the 183rd Oktoberfest starts on September 17 and runs until October 3. It is the world’s largest festival, attracting more than six million visitors per year.

It all began in 1810 when Bavarian Crown Prince Ludwig married Princess Theresa. The party was so fantastic that they decided to celebrate annually and the Oktoberfest soon became a tradition.

Maybe some of you have already heard the saying “O`zapft is!” Each year, the Oktoberfest starts with this proclamation. After the annual Oktoberfest parade, the Mayor of Munich taps the first beer barrel at 12 o’clock in the Schottenhammel-Tent. When he says “O`zapft is!”, the Oktoberfest is officially declared open. A twelve gun salute is then the signal for the hosts in all tents that they can start to serve beer to the thirsty guests. Of course, the Prime Minster of Bavaria always gets the first liter of lager beer.

By the way: many years ago the monks also celebrated Oktoberfest in their own unique way. Each monk had to drink 5 liters of beer each day until the Oktoberfest ended. Can you imagine that?!

In total, you will find 32 tents on the 42 hectare Theresienwiese (fairgrounds) serving Oktoberfest beer. Each beer at the festival has been brewed within the Munich city limits. The breweries are: Augustiner Bräu, Hacker-Pschorr-Bräu, Löwenbräu, Paulaner, Spatenbräu, and Hofbräu München.

You can also eat traditional Bavarian food at all of the tents, for example, roasted ox, grilled fish, the famous Hendl (chicken), dumplings, Sauerkraut, grilled ham hock and pretzel.

Around 116 whole oxen and 510,000 chicken are sold at the event every year. This is the most popular food at the Oktoberfest. My favorite food is the roasted ox with potato salad and dumplings. 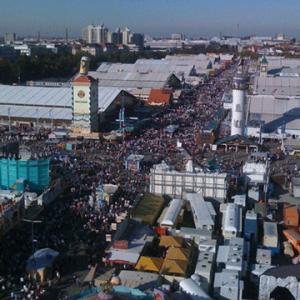 Furthermore, there are numerous attractions for everyone, such as rides, games, side stalls and a huge Ferris wheel. There is something for everyone, old and young.

Which kind of music do you expect? Until 6 pm, they play typical Bavarian music from brass instruments – this is to make the stay pleasant for the older people and children. After 6 pm, they switch to pop and Schlager-music.

Is it worth it to visit the Oktoberfest? Definitely! I am sure you will enjoy!

Perhaps we will meet at the “Wiesn”?! I will be there two or three times…

Max Lang joined LSG Sky Chefs in Munich in September 2008 and works as an Account Manager. He is a Bavarian through and through and has visited the Oktoberfest every single year of his life.

Every morning, a particular employee in the Denver facility would arrive to his shift three hours late. Not because he had overslept or did not want to …